Fun place settings for the holidays!

I love doing fun little things at the place settings when the whole family gets together. Do you?

Here’s a fun project that I posted before…but some are worth highlighting again. Whether your hosting a book club meeting  — or just looking for a fun place-setting for your Thanksgiving dining table, this is an easy project that will get lots of smiles. 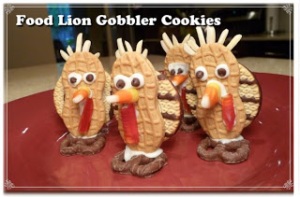 It was from the grocery store chain FOOD LION. Gobbler Cookies

Look at the picture and then get creative!!

And being stopped for speeding changed her life.

Yep…that about sums up how Savannah Dey met Sheriff Scott Calvin. He’d stopped her for going seven miles over the speed limit. Oh…do…not…scoff. It happened all the time in the little town I used to live in!

Barbecue and Bad News will be the 6th Adams Grove novel and it comes out 2/10. You can pre-order it now though. Catch up on the whole small town series of love stories speckled with suspense…and by the way you can get Mint Juleps and Justice for just $1.99 for your Kindle the rest of this month!

Welcome to Adams Grove…where the tea is sweet, but trouble is brewing!

Oh! If you want to be sure you get an alert when Barbecue and Bad News is out — add it to your Goodreads shelf by clicking here or go to Amazon and LIKE my Author Page here and Amazon will give you a quick email when I have any book coming out. Cool, huh?

Pretty Little LiArs ~ A world to get lost in

Hey friends
A while back I was given the opportunity to write some shot episodes for the launch of Kindle Worlds in the Pretty Little LiArs world.

I’d never written shorts like this — but I tried to look at them as short 30 minute episodes. Hope you’ll check them out, and share with your friends who enjoy the television show.

Thanks so much for joining for the cover reveal of PECAN PIE AND DEADLY LIES tonight on Facebook. If you missed it, or you want to share with your friends….here it is again. 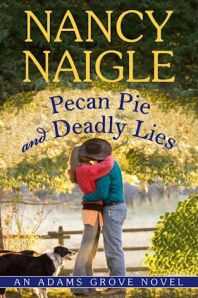 I’m so excited about this book. It’s the follow-on to OUT OF FOCUS. This is Cody Tuggle’s story and is the fourth in the Adams Grove series.

We did a giveaway during the reveal this evening. Here are the lucky winners::

Thanks for making the cover reveal so special. I had so much fun chatting with all of you. 🙂   If you’re on Goodreads.com I hope you’ll add all of the Adams Grove books to your bookshelf.  If you need chapbooks, or swag for your book club just shoot me an email at nancy@nancynaigle.com.

This is a pretty exciting time for me. WEDDING CAKE AND BIG MISTAKES will be out in just a few weeks (July 9th), and then just two months later….another release. I’m going to share a sneak peek of the cover of PECAN PIE AND DEADLY LIES with my closest friends and readers before it’s even up on the Amazon or Barnes and Noble websites.

Let’s make a little party of it, shall we? Join me on Facebook Sunday evening and we’ll chat about the story and characters, and I’ll even share some trivia from the process.  Then, we’ll draw for some prizes, and wrap up with the cover reveal. You can start entering today. You can earn up to 30 entries if you do everything!(scroll to the bottom to get to the rafflecopter page to enter!)

What do you have to do to win something? Oh, it’s so easy, and there are options that will earn you extra entries, too. There’s a Rafflecopter form below that lays out all the different ways you can enter. Do one or do them all. It’s up to you.

Why am I so excited?

OUT OF FOCUS is still one of my favorite stories. If you haven’t read it yet, I hope you will because you’ll enjoy PECAN PIE AND DEADLY LIES that much more if you have all the history between Kasey and Cody.  When Kasey was at her lowest point, Cody was a true friend…and don’t we all treasure those types of friendships?

Kasey Phillips thinks her biggest problem is deciding whether to photograph Cody Tuggle’s honky-tonkin’ tour, until an accident on Route 58 claims the life of her husband.

In a desperate race against time as a hurricane threatens the eastern seaboard, they search for her three-year-old son who is missing from the wreckage.

A community and friends rally to help, but someone knows more than they are telling.

Here’s the back cover copy for PECAN PIE AND DEADLY LIES.

America’s beloved country superstar Cody Tuggle never expected to be one of America’s most wanted. At least that’s how he feels since he’s been accused of murdering his scheming agent. Desperate to prove he’s innocent, he turns to his only alibi, award-winning photographer Kasey Phillips, who recently toured with him and his band.

After an exciting life on the road, Kasey has settled down in small-town Adams Grove with her five-year-old son. Unexpectedly reunited with Cody, she finds herself open to love again. But just when she’s ready to fall, everything she ever believed about him is called in to question.

Cody has waited a long time for genuine love, and he can’t let this chance with Kasey slip away. But as the evidence stacks up, the accusations against him put a damper on the sparks flying between them. Can he convince Kasey he’s innocent, and will she clear his name in time? Or will their dreams of the future be the victim of a deadly lie?

***CLICK HERE TO GET TO THE RAFFLECOPTER GIVEAWAY***
Don’t worry…there’s a GO BACK button to come back here, too.

Who can I count on to join my Sunday evening??

Not sure what an Advanced Reader Copy is? It’s an uncorrected proof of the novel. It’s the format that the publisher sends out for promo and early reviews prior to a release date. This book is the third in the Adams Grove series and it will come out on July 9th. Here’s what the ARC looks like::

compared to the final version which will have this beautiful cover ~

JOIN ME IN A BIG CONGRATULATIONS TO:

WELCOME TO ADAMS GROVE…where the tea is sweet, but trouble is brewing.

Read the whole series…. (Wedding Cake and Big Mistakes is available for pre-order — as is the Sept 24 release of Pecan Pie and Deadly Lies)

“Adams Grove” – Introducing “Adams Grove”, the first in our line of celebrity endorsed candles. A novel scent named after the small town in the series written by the Virginia native author, Nancy Naigle. Read and relax to the soothing  combination of vanilla and lavender.

To celebrate I’ll be giving away two Adams Grove gift packs that include a Read. Relax. Repeat. water bottle huggy, a special votive sized Adams Grove scented candle, and a sneak peek at the first chapter of Wedding Cake and Big Mistakes which comes out on July 9th.

Lots of chances to get in the game… with a Rafflecopter giveaway.

We turned the clocks and did the SPRING FORWARD thing this weekend and I bet you all are just as antsy as I am for spring to get here. Well, today I have a special treat for you. A great book that will put you right in the swing of things.

My author friend, Tracy March, has her debut release today. The book is called THE PRACTICE PROPOSAL. It’s a sweet contemporary with small town connections and a hot baseball player as the hero. I had the great honor of reading this book prior to release. I loved the story so much that I did the cover blurb. 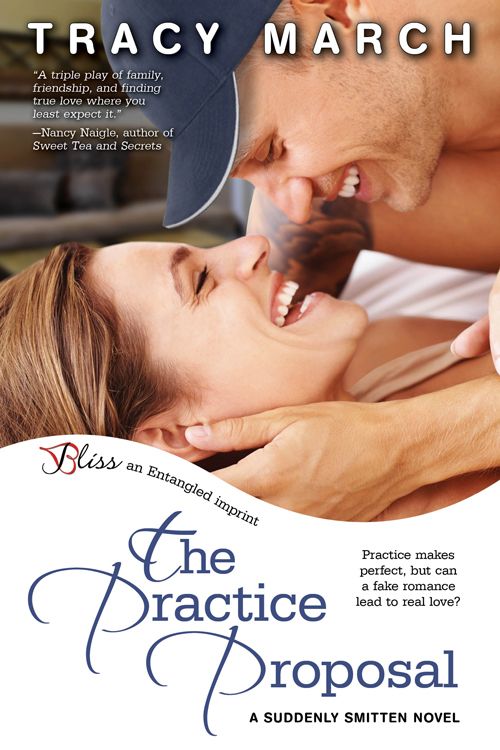 Don’t take my word for it….jump on over to Amazon.com and order your own copy. You’ll be swept away by Liza and Cole and if you’re like me … you’ll be anxiously awaiting the next Bliss book from Tracy later this year.

Let me know what you think! And if you love it … please take just a moment and leave a sweet review on Amazon. It’s one of the best gifts you can give an author 🙂

Congratulations to Virginia Rush who won the prettiest tea cup and assorted teas for joining in yesterdays fun!

I’ve got a cute Keeper Kase™ with autographed cards for SWEET TEA AND SECRETS, OUT OF FOCUS and Dianna Love’s new title, LAST CHANCE TO RUN, to get you started up for grabs today. All you have to do today is pop on over to my author page and leave your thoughts on what format you like to read in. Paper, Digital, Audio….AND you’re favorite place or time of day to read.  EASY as 1-2-3.  Click on over there now if you like! https://www.facebook.com/NancyNaigleAuthor?ref=hl

WHAT?? You don’t know what a Keeper Kase™  is? Lordy goodness, let me fill you in!  A Keeper Kase™ is the fun brainchild of author Dianna Love, and it’s a a way to collect signed covers of your favorite books (we’re calling them Keeper Kase cards)–by using a Keeper Kase™  to complement your library (ebook or print!) where you collect signed swag from your favorite authors. You can use any photo album or “brag book” that holds 4×6 inch photos–and you can have them signed and personalized to keep alongside your e-reader, or your fav collection of books.

I’ve joined a great group of authors who have cover cards ready to send so you can start your collection today.

If you don’t win today’s prize — you can always join in the Keeper Kase card fun on your own. (You won’t get the Kase…just the cards) TO RECEIVE TWO OF THESE BOOK COVERS AT A TIME Send a SASE (Self-addressed stamped #10 envelope ~ that’s the long kind! ~ and one stamp will cover it) to:  NANCY NAIGLE ~ PO Box 723 ~ Emporia, VA 23847

Each of my cards includes the cover image, and a special little something about that book, along with a place for me to personalize it for you (or that someone special as a gift or keepsake).

Now you can collect signed covers of your favorite books. Perfect for fans of digital reading, and a fun gift for that hard to buy for book lover on your list.
These cards solve for some of the feedback we’ve heard recently, like:

To see the latest list of authors with cards ready for your own Keeper Kase™ , visit Dianna Love’swebsite.

Can’t wait to see your posts on facebook….and here too if you like…Hugs and happy reading~

I always get worried when I do math in public . . . haha . . . but we’re going to say 13 days and just count on down from here.  On Tuesday, September 25th, SWEET TEA AND SECRETS will be released by Montlake Romance. You don’t have to wait to order it, you can pre-order today. I’m hoping you, my friends!, will help me spread the word so we give this book a happy launch day on the 25th!  To get in celebration mode, each day until then I’m going to give a little something away. You in? It’s easy! I promise.

Yesterday, Dina Stornello, was the winning commenter. I just shipped out her advanced reader’s copy of Sweet Tea and Secrets, a Killer Nashville Read. Relax. Repeat. Tote Bag and a couple other goodies. Fun!

Ready for your chance to win??

WHAT DO YOU HAVE TO DO TODAY??

WHAT’S UP FOR GRABS?
An adorable tea mug and assorted Harney & Sons tea, along with a Killer Nashville READ. RELAX. REPEAT. tote bag because they are so handy!  I’ll draw today’s winner at midnight PST so all our friends coast to coast get a chance.